At the Museum of Fine Arts, Budapest

The opening section of the retrospective show looks toward the independently produced Helmut Newton’s Illustrated, four magazines published at random intervals on whatever subjects took the photographer’s fancy. Anyone who is familiar with Newton’s work can rightly guess what types of images predominate (if not I’ll give you a clue – the title of the first issue was Sex and Power). The second section, co-joined with the first, is his portfolio of images entitled Private Property, captured from 1972 to 1983 during which time the photographer was moving through his fifties. Age wasn’t a restraint on his work; his continuing career is demonstrative of an unstoppable appetite.

Sadomasochism elegantly displays its thin neck in the form of items which bind and contain. A woman’s bare leg is encased from ankle to cheek in a barbed-wire like casing, metal pricking into the surface of her pearly flesh. In another photograph, which if a little less strategically lit and artfully framed could have criminal undertones, a woman in stockings lies otherwise naked, face down onto the floor and handcuffed to a battered metal radiator. But these aren’t throw away material to hold in sweaty palms during alone time, these are depictions of sculpted, athletic and highly eroticised bodies. They are the ultimate site of fetish, the most sophisticated form of fantasy and precisely applied brutality is projected onto this lean version of female.

The female which populates these images is also capable of being the latent antagonist, showing signs of aggression which don’t align with the idea of a victim. Sharpened, striking nails as talons are a recurring theme. Whilst in most images undressed women are impassively looked over or bound next to fully dressed men, in others girl on girl possession is illustrated. One thing remains true: whether strong and dominating, or more often subservient and reduced, woman as seen through Newton’s lens is an object. In one photo from 1977 entitled Mannequins Reclining, the mannequins in question are actually naked women, languidly stretched out on a rug in the sunshine filtering through a window. In many other images parts of bodies are shown, dissected. The fullness and complete potential of woman is reduced. 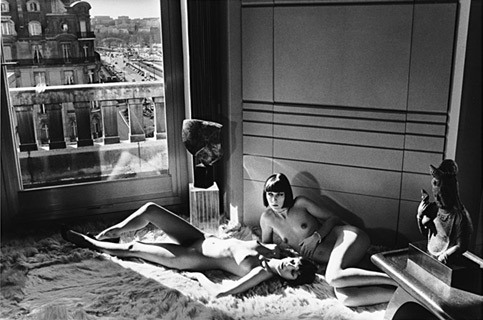 In the third section, the advertising images titled A Gun for Hire, the themes continue, albeit slightly diluted. Each fashion house has clearly dictated elements of the look, the girl and the stage. In full technicolor these are less interesting, a little more tawdry, less film noir. In one image the middle section of a model is thrust forward at the groin, she is seemingly tied to a white railing pole. The high-cut leather swimsuit which cuts across her crotch pulls attention to the visible shaving bumps all along its lower edge. Another campaign shows a dead-looking woman in girlish clothing being casually pinned down to a bed of newspapers by a man’s sneakered foot. These people are all interchangeable, blank eyed and glossy. In a couple of shots the girl-women even hold a photograph of their faces over their actual face, further illustrating that these bodies are blank sites to be projected onto. 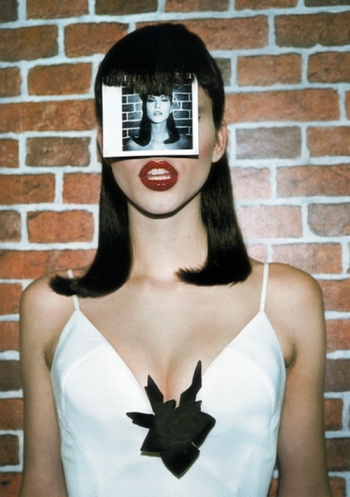 Newton’s argument that he was a feminist is a difficult pill to swallow. While he certainly idolises a pale, model perfect female body, he reduces her to less than human. For every strong female image (largely in the advertising shots which he didn’t fully control) there are five more where woman is a sex doll, a dead mute carcass, a collection of body parts or a thing subservient to men, to the camera or to a harder edged masculine woman. Violation is everywhere. A full cooked chicken being prised apart by a clawed hand calls to mind splayed female genitalia. A dog lunges upwards in between a woman’s open legs, just on the cusp of attack. Heels, cuffs, chains and guns are recurring.

These virulent ideas and descriptions, once considered fetish, have long since bled into everyday consciousness. Elements of the same cruel and self-fuelling imagery can be evidenced in newspapers, Hollywood and pornographic movies, magazine pages, pop videos, fashion shows, strip clubs and high streets across most of the globe. Only one thing dates these images as slightly less than current: the prevalence of public hair. Nowadays we prefer our sexual fantasy parts gleaming bare, just like a mannequin. The final set of photographs in the show sum up the unrealistic point we have now reached. In this advertising campaign for Vogue tiny teenage girls in tinier bikinis flaunt their hard, hairless bodies, passively displaying their firm breasts and podgy blossoming faces. This is what we women now expect, to be sold our clothing and our notion of what it means to be female through the image of a highly sexualised child. 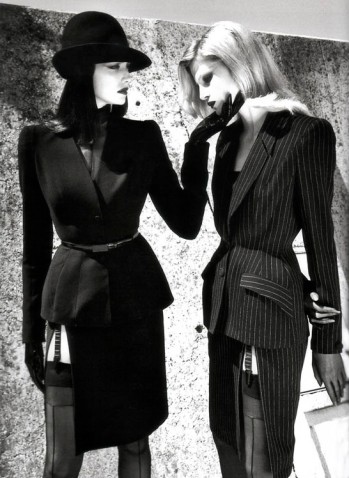