I wasn’t familiar with the work of this artist before, nor (rather shamefully) had I acquainted myself with the venue. Described by this exhibition press team as a ‘celebrated British artist’, further research into Benney’s background reveals a quietly comfortable career and moderate successes. He has work in the MET  and the National Portrait Gallery collections, has exhibited fairly widely and now, until 9th December, has secured a solo show of his paintings in the ‘Deadhouse’ at Somerset House.

The entrance to this exhibition was standard enough, until it led to the exterior of the basement into what looked like an old fashioned stable yard. The first set of works were enclosed within individual vault like rooms along a cobbled semi-circular path. The heavy stone walls and imposing think black doors gave a sense of entombment, it was late evening on my visit and the remains of the bad weather were dripping along the interior of the walls. Setting the tone for the show, Benney’s opener, The Burning, depicted a single figure with a cane stood amongst heaps of burning flame, amid a smoky, Turner-esque pastel sky. The vision was dreamlike, an apocalyptic kind of dream, or resembled your worst imaginings of Afghanistan or any other modern war. 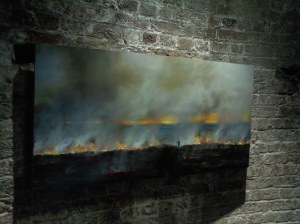 Enclosed within another of the cells was Levitation, my favourite piece showing a male figure clenched tightly into a clasped ball under a rippled blue surface of water. There wasn’t enough disturbance in the water to suggest the man had dived into his position, he was apparently hung there as if suspended just under the surface. The murky khaki of the deeper waters seemed to encroach on his eerily white, vulnerable body and inside the claustrophobia of the small stone room, it felt as though it was me holding my breath.

Slightly further on, when the cobbled path had led to the Deadhouse itself, I was inside the core of the exhibition. Religious symbols were referenced a number of times: saints, candles, the sense of martyrdom. Some of these works employed resin to create a glossy, translucent surface that the figures could be submerged underneath. In one work, a man reached his fist through the milky dream-like surface of the paint, as if reaching out to the real world. Whether Benney’s protagonists are willing inhabitants of his indistinct imaginary worlds, or whether they would consider themselves captives remains unanswerable.

The play of light and shadow in the Night Paintings does occasionally, convincingly pull you into a deep reverie. These works demand isolation in their viewing, I was largely alone on my visit and the experience was all the more complete for the lack of noise. Some of the works had a distinctly monumental quality, a slight dash of Anselm Kiefer, but at their worst Benney’s paintings seemed tacky and obvious, gaudily displaying the flaws in the artist’s figure painting ability. A couple of the more figurative works looked clumsy and crass, completely overwhelmed by the interior architecture.

This show has been sold by Somerset House as an atmospheric and unique experience, and it would be easy to buy into the temptation of believing this statement within the confines of the dimly lit space. The reality within the paintings seemed to shift between something quite tangible, to an afterlife scenario or fabrication of the truth. Yet how far the multiple interpretations were enhanced due to the location is hard to gauge, would these works have such impressive presence within a white cube gallery space? This is not a consistent display, by any means, but I still consider it worth a visit to draw your own conclusions to this question. 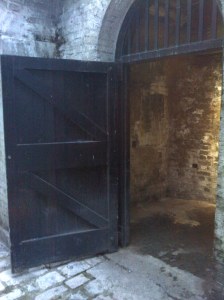 One of the cell like , exhibition rooms awaiting you at Somerset House.

Curated by the artist. On display until 9th December 2012.